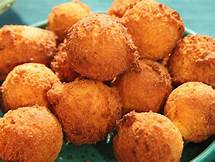 In a bowl combine flour, cornmeal, corn, onions, jalapenos, and sugar, mix well. In a separate bowl add the egg and buttermilk, mix well, then add to the dry ingredients, mix well. Set aside and allow to rest for 10-15 minutes. Add approximately 1/2 cup of peanut oil to a heavy skillet, heat the oil to 375 degrees.  Scoop up a heaping tablespoon of the batter with wet hands roll into a ball, drop into the hot oil and fry until golden brown and crispy on all sides.

This site uses Akismet to reduce spam. Learn how your comment data is processed.

Past to Future in a Picosecond

New Orleans area restaurant reports and occasionally some from afar!

THIS SITE IS ABOUT ME, MY CREATIVITY, MY IMAGINATION AND MY FEELINGS.

This blog is all about roaming the Bicol Region, Philippines wisely on a budget. We'll talk about what Bicol has to offer when it comes to great hotel deals, good food and where to go on your vacation. So, I hope this blog site will be helpful to those of you on the look out for great deals while you have fun in Bicol. Also, I will be sharing what my life here is like and some of the things that I find interesting in my side of the world.

On the Menu @ Tangie's Kitchen

Healthy, wholesome and affordable cooking for the heart and soul.

German comfort food for the soul

Influence of different cultures & countries on food of each other.

I have to sit down.