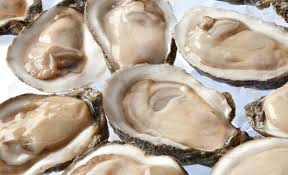 OYSTERS ON THE HALF SHELL

The oysters used should be alive, plump, clear and most importantly they should smell fresh. Scrub the shell with a brush under running lukewarm water.  Get out a colander and a bowl, set the bowl over the colander, set aside. Place the oyster in your hand with the thickest part of the shell pointed toward your palm. Get out a short, thin, sharp knife, insert the point of the knife at the back of the shell and run the knife around the shell until you cut the muscle that holds the shells together.  Put the opened oysters in the colander.  The liquid from the oysters will drain into the bowl, reserve the liquid, set aside.  With your hands open the shell, using your fingers feel the oyster, remove any and all particles such as shell from the shell.  The oysters are now ready to be served.  Get out a shallow bowl, fill the bowl with cracked ice.  Decoratively arrange the oysters, in the shell on top of the ice.  Serve with creamy horseradish, hot sauce, pesto, cocktail sauce, and lemon wedges.

This site uses Akismet to reduce spam. Learn how your comment data is processed.

Talking Our Way Through To Good Money Habits

Past to Future in a Picosecond

New Orleans area restaurant reports and occasionally some from afar!

THIS SITE IS ABOUT ME, MY CREATIVITY, MY IMAGINATION AND MY FEELINGS.

Welcome to Bicolandia! A region located in the Southern part of the Philippines. This blog is dedicated to anything and everything we love about Bicol. Let me tell you about the things that I find interesting in my side of the world.

On the Menu @ Tangie's Kitchen

Healthy, wholesome and affordable cooking for the heart and soul.

German comfort food for the soul